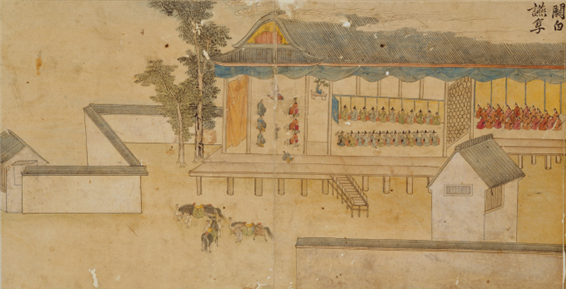 Although the envoys sent to Japan were referred to with various names depending on the purpose of dispatchment, “Tongsinsa” is the most common name known until know. This term literary means envoy who communicates trust.

Tongsinsa Ipganghoseongdo in the 14thyearofKingInjo (held at the National Museum of Korea) As the relationship between the 2 countries became more stabilized, the significance of Tongsinsa as a cultural convoy became greater. They were dispatched to convey the message of congratulation for the inauguration of the Shogun of the feudal government and to deliver sovereign message for confirmation of friendship between the 2 countries. In the process of journeying to Edo by crossing the sea, active cultural exchanges were executed additionally.

Saroseunggudo> (held at the National Museum of Korea It is aimed at following the traces of the cultural exchanges between the 2 countries accomplished through the dispatching of Tongsinsa through the materials.