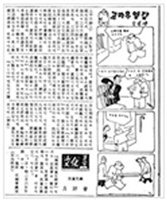 Editorial cartoons are drawings that offer commentaries on people or current events in a sharp, sarcastic manner. In Korea, there have historically been two types of editorial cartoons: multiple-panel editorial comic strips like Mr. Yaro (야로씨), which was a strip created by Oryong and published in the Chosunilbo newspaper, and single-panel political cartoons such as Dongaheupyeong by Insu Baek and as seen in the Dongailbo newspaper. By simply reading a comic strip, readers are better able to pick up on the most important news of the day and on the political leanings of the newspaper than they would by reading a long editorial piece.

One of Korea’s most famous editorial comic strips was Gobawu Yeonggam (고바우영감), translated to Old Man Gobawu, which was created by the cartoonist Seonghwan Kim. The character Gobawu first appeared in the Manhwasinbo (1950), a weekly comics newspaper published by sculptor Hyojung Yun and war correspondent Seonghwan Park after the September 28, 1950 recapture of Seoul. The Old Man Gobawu comic strip first debuted in publications made for soldiers, such as the Sabyeongmanhwa and the Yukgunhwabo. During the Third Battle of Seoul (also known as the January-Fourth Retreat), Kim also participated in the creation of the Manhwaseungni, which was published for soldiers by the Ministry of National Defense. As Kim began to publish Old Man Gobawu in popular magazines like Huimang and Sintaeyang, which started to appear after Korea’s government moved back to Seoul in 1954, his reputation among inTELectuals began to grow. 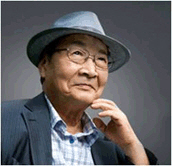 Old Man Gobawu holds the unbeatable record of having appeared in newspapers a total of 14,139 times over more than 50 years. Over the course of its lifetime, Old Man Gobawu was carried by four different newspapers, beginning with Manhwasinbo in 1950 and then by the Dongailbo (1955-1980), the Joseonilbo (1980-1992), and the Munhwailbo (1992-2000). Gobawu was such a cherished and popular cartoon character in Korea that a movie was made after him, as were commemorative postal stamps and a prize for comic strips. Gobawu also has his own entry in the World Comic Encyclopedia, has been featured on streetlamps, and was the subject of a PhD dissertation.

Old Man Gobawu was forged during the Korean War and witnessed some very tumultuous times in Korea’s history, such as the April 19 Revolution, the May 16 Military Coup, the October Revitalizing Reforms, and the rapid economic growth of the 1970s. As a result, Kim had plenty of fodder to draw inspiration from for Old Man Gobawu. Kim was also a firm believer in freedom of speech and had a great capacity for simple and clear metaphors. But it was only by combining all these factors with Kim’s love for the common people that Old Man Gobawu’s extraordinary lifespan of 50 years was made possible.