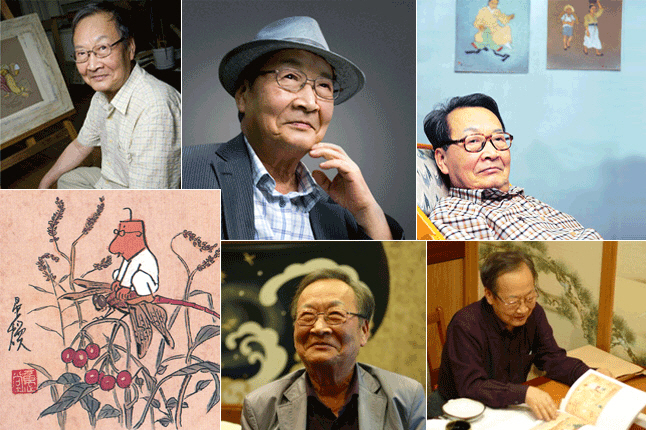 Seonghwan Kim had a talent for drawing ever since elementary school. He attended Kyeongbok Middle School (as Gyeongbok High School used to be called), which was famous for producing excellent artists in Korea. In 1949, when he was a teenager, he published the cartoon Meongteongguri (멍텅구리) in the Yeonhap newspaper to earn money for his family. As a young man, he was unable to flee Seoul during the Korean War and instead hid in his attic in Jeongreung, where he created 200 cartoon characters. It was during that time that he created Gobawu, one of Korea’s most well-known and beloved cartoon characters. Korea later underwent rapid development during a very short period of time, and Kim often depicted the wrongdoings of the dictatorial government of this time through Old Man Gobawu, which gave the common people vicarious pleasure by expressing what they dare not. In his old age, Kim, freed of nerve-racking newspaper deadlines, was able to indulge in his own artistic pursuits and published “Shantytown Stories,” an art volume that took place in the 1960s backstreets of Seoul. Kim recently recalled a time when, while riding the bus and gazing out at the trees lining the street, he couldn’t help but to think to himself, “You might live longer than me.”